After riding the rails to Denver, Karen and I caught a cab to the Car Rental lot in Denver near the airport. As she inspected the car I caught a glimpse of a bunny face-off in the small patch of grass separating the lot exit from the street. I dropped my luggage and grabbed my camera – I no longer cared about what kind of car we would rent, or mileage, or color, or insurance, or anything else. My whole world revolved around capturing the images of those bunnies. The scuffle was short and I missed a chance to get the loser flipping backwards – but the victor hung out with me for a few shots.

Karen apparently turned around to ask me a question and discovered I was no where near the car – I heard her mutter something like “Where’d she go?” and snapped back to the present. We hopped in the car and drove the two blocks to the hotel – as Karen carried her luggage to our room I stayed in the parking lot attempting to get great shots of sparrows. I spotted something large on the roof – click – I got it!! Our wildlife adventure had begun!

Now I should clarify that this road trip was intended for us to visit as many National Parks and Monuments as possible – you see we belong to the ultra secret society of National Park Passport Stamp Collectors, we even have a secret handshake – more on that another time. Anyway, I was prepped and ready to go after those big captures, and Karen seemed eager to help me on my quest for amazing animal photos. My new ultra-fast focusing Olympus E-M5 had arrived 2 weeks before the trip. I had been practicing shooting crows with my long zoom in the back yard – I was loaded for bear – I mean really – I actually thought I might get to shoot a photo of a bear!

The next morning we headed north towards Scott’s Bluff in Nebraska. It’s along the path of the Oregon Trail. We had barely left Denver when Karen suddenly brought the car to a screeching halt – “Look!” she shouted ant pointed out my window. I grabbed my camera and caught this guy – nothing special and I never left the car – but he was actually wildlife living outside the city!

As we entered Nebraska and left the interstate we had more and more “in-car” shooting opportunities. After all we were our where the Deer and the Antelope play – 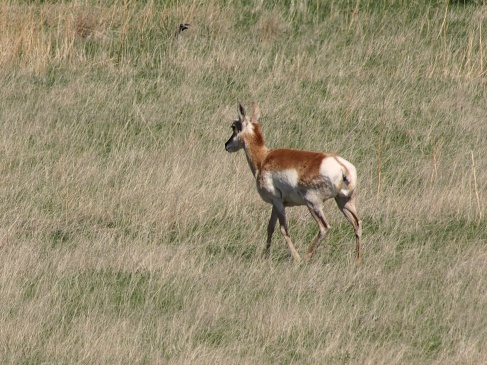 We arrived in Scott’s Bluff at 5:01 – and convinced the Ranger to let us use the stamp. Amazing shots of actual historical sites were all around us. The famous bluff that settlers saw as they left the last outpost of civilization on their way to Oregon was right there in front of us – I snapped a few, but saw a bunny and a robin and was once again distracted. 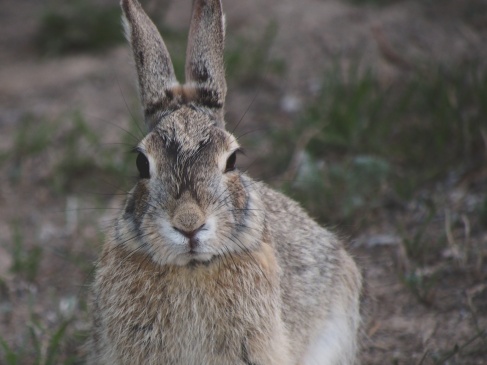 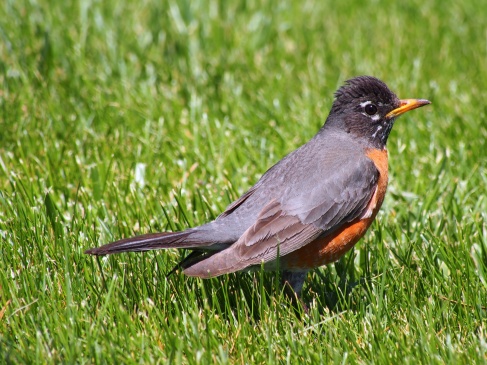 The next morning we headed towards Mt Rushmore. Along the way we passed through Hot Springs, South Dakota. There was a lovely waterfall overlooking main street – I wish I could show you a photo – instead I took these shots:

Actually I took about 40 shots trying to get that bee in focus – totally worth missing the waterfall shot!

Soon we were entering Wind Cave National Park. I have heard that there is a Cave of some size there, I can’t vouch for that but I do know that there are buffalo there in abundance.

I saw this one and had to jump out of the car to climb up a hill to get a better angle. He was just the tip of the iceberg. This guy was huge and right near the road – I never left the car for fear that he could trample me!

He actually tried to get into the car when Karen flipped a U and offered to let me shoot out her window – She didn’t think he was all that close until he was coming into her window! 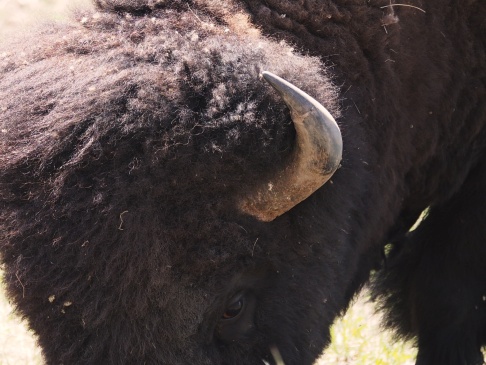 We sped off and managed to get about 30 yards away from the beast when we discovered prairie dogs – I won’t bore you with the dozens of adorable photos I took while still only yards from the very large buffalo – here’s a single shot of one for perspective:

And a few more wild things we saw at Wind Cave: 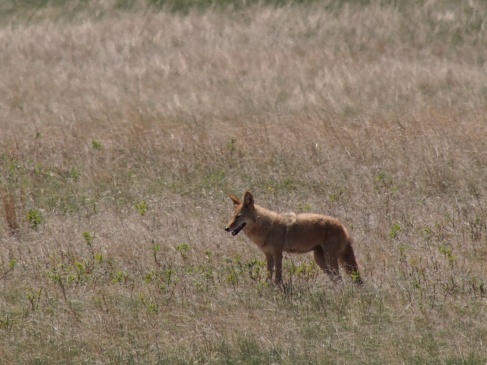 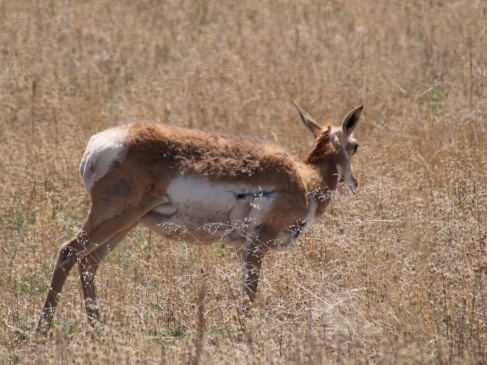 As we left Wind Cave headed for another park with a hole in the ground I managed to capture this meadowlark on the park’s sign post.

We spent the next few hours touring caves and a huge carving of Crazy Horse – I was having withdrawal until we spotted this small herd of deer on the way out of Crazy Horse – BTW – that carving will be amazing once they get the horse done.

That evening we made it to Mount Rushmore. We saw a bunch of cars pulled over as we got close to the park. We were sure they were shooting a bear or a mountain goat so we pulled over – turns out it was just George Washington’s face – bummer.

We went to Mount Rushmore and saw the flag ceremony that night and returned in the morning to shoot in the daylight. What a patriotic experience – I was filled with national pride…and I got this shot! 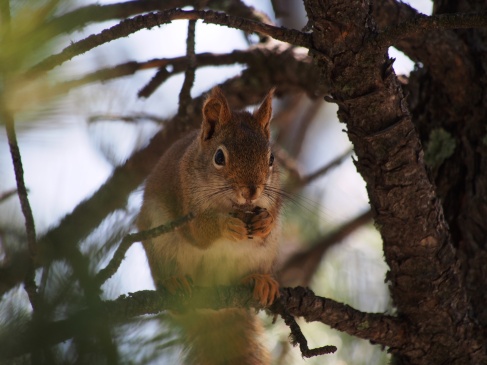 We headed towards Wyoming and onto Devil’s Tower. Stunning! So many prairie dogs! 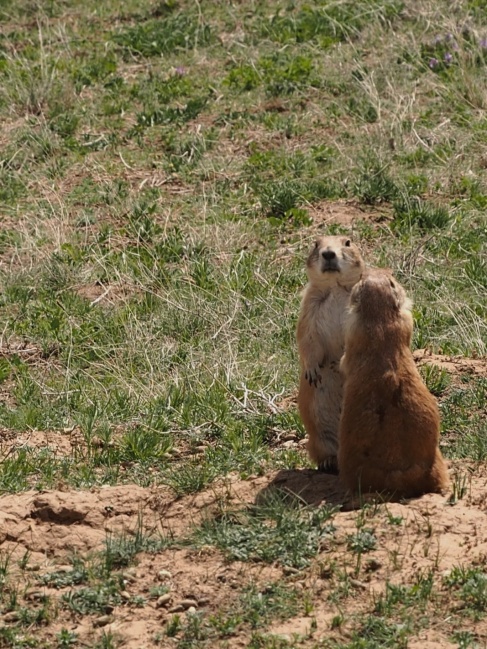 This one attacked Karen – lunged towards her and screeched while she was photographing another dog – these guys were camera hogs! 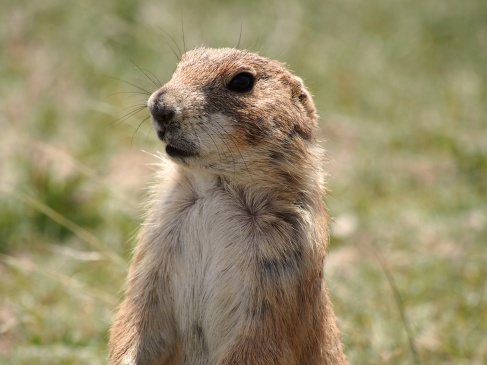 We jumped back over the Nebraska line to Agate Fossil Beds National Monument. We walked for a couple of miles and never saw any agates or fossils, but there was a bird bonanza!

From there we went to Fort Laramie, Wyoming were I saw no animals at all – not even a pony for the Pony Express. So we turned south to head to Rocky Mountain National Park.

We hit the park just before 5 so we only got to get one stamp. We thought we might drive to another station but we saw antlers below the roadside – I asked Karen to pull over and we hiked back up the road to find this little fellow:

Karen thought he wasn’t paying enough attention to us so she did some jumping jacks – this was his reaction:

We started back towards the next station when we saw this youngster on the roadside:

As I got close enough to see beyond the brush I found his pals.

At this point I told Karen I would rather take pictures of these guys than get a stamp – we both shot about a hundred shots of these guys and drove back to the main part of town to find a hotel. We found a cool little place next to the golf course and guess what we saw almost outside our room – a young bull watching the goose races! 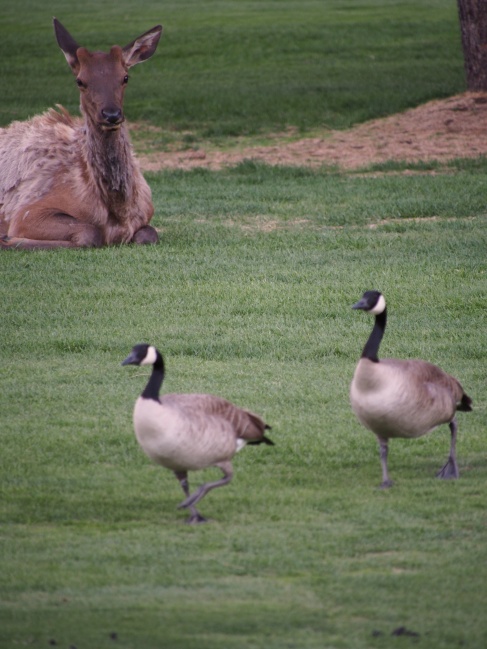 If we were seeing this many animals outside the park I was sure that this park was going to be amazing, and it was. No historic buildings or markers. Just wildlife at every turn. So many elk we just quit stopping to shoot.

At the Ranger station we saw this guy – totally unafraid of us. 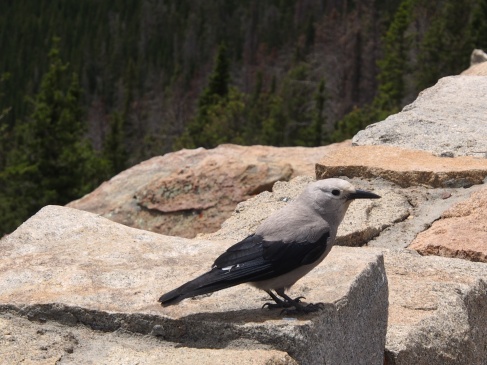 When we climbed to Forest Park we got to see what a marmot looks like. 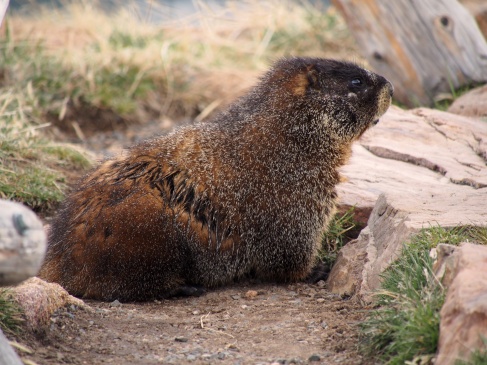 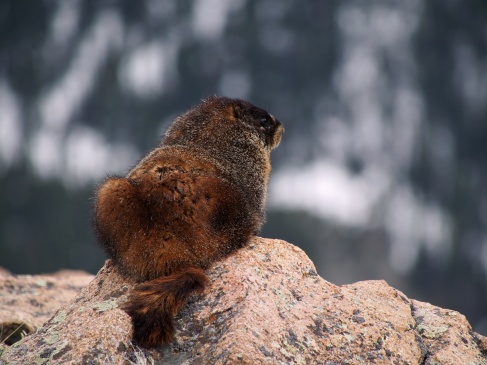 Here Karen gets her shot at one after being thwarted by a rude Chinese tourist.

As we approached the highest point on the loop around the park and the continental divide we saw no animals at all – lots of wind and snow, but apparently nothing hangs out any higher up than the marmots.

As we descended back to the meadows leading to the park exit we saw another grouping of elk. I thought it would be good to get them in their natural habitat instead of on a golf course – but as I got out of the car and started to cross the meadow I saw that these were no elk – holy cow! Moose!

I got to within about 40-50 feet and saw her head come up – I snapped about 5 shots and slowly backed away.

Now I’m back home, back at work. I did hear a bird calling yesterday and ran outside with my camera – no dice. Something about being out on the road that gives me stealth. I guess it’s time to go back to still life.

286 thoughts on “Where the Wild Things Are”