I live off of a county road in the Ozarks, a couple of miles from the pavement, deep in the woods a few miles from town. Everyday when I drive to work I pack up my camera gear – I pull out my camera and zoom and place it on the passenger seat, leaving it ready to shoot in case I see something amazing. This seems to happen daily and I do my best to catch it. These shots are all along the route of my daily travels to and from work.

The shot above is Krishna, he’s our neighborhood peacock. He showed up about 3 years ago, we don’t know of he was dumped or if he was attracted to the area by a female at a neighbor’s house. We tried to find his owner for about a year. When the female died, Krishna became fascinated with the glass windows on an old Grange hall on the highway. He puffs up as he tries to impress his own image on the glass doors. Another neighbor has adopted him, but he still crosses the road every day to take on that handsome guy in the window. On this afternoon he was avoiding me so I got low and shot through the weeds.

This is a box turtle, the woods are full of them. I found this guy out on the road not far from the mailbox. When I see one in the road I like to stop if I can to set them on the other side of the road. These guys have no natural enemies except for automobiles. In the spring they are on the move and on any day you can encounter a dozen on the way into work. I read once that they travel on a path that is instinctive, a lot like salmon swimming up the correct stream to spawn. I found one in my wood shop one day last spring. I picked him up and took him outside and he ran right back into the shop to the same spot about 30 feet into the building. I put him back outside and pulled the door closed and he pushed against it for hours. I finally opened the door so he could go in, he was there a few days and moved on.

This is a European Starling in the parking lot at work. They invade the siding and soffits every spring to nest until their babies are ready to fly. This one would dive bomb you if you got too close. They are often seen as pests here in the states, and it’s really not their fault. They were introduced into Central Park in the late 1800’s by a literary group who thought that every bird mentioned by Shakespeare should live in the park. They are not native to the America’s but they thrive here. They like to kick other birds out of their nesting sites and hijack them for their own. 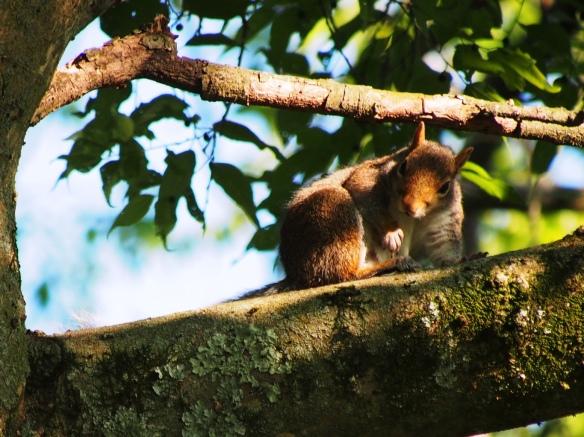 This is a cute little squirrel that I saw driving through town a few weeks ago. He’s cute because he is nowhere near my house. I think God made squirrels cute because they are so destructive. I have a pair of grey ones in my shop, I cannot get them out. They destroy everything they are evil, don’t be fooled. Evil, pure evil.

I found this guy on my porch one night. His eye is so amazing. It’s like layers in a painting. I used a flashlight to get him lit like this. My dogs like to push on these guys so they jump. They will follow them all over the lawn on a spring night.

This morning as I turned out of the driveway I saw a couple of deer crossing the road ahead of me. He stepped through the brush about. 20 feet away. I slowed down and opened the window and he froze. We watched each other for several seconds. I notice that if a deer is not running, just crossing, they often stop to check you out. After 15-20 seconds he made a puffing sound and took off into the woods. I see deer like this almost daily. Lots of fawns right now too. 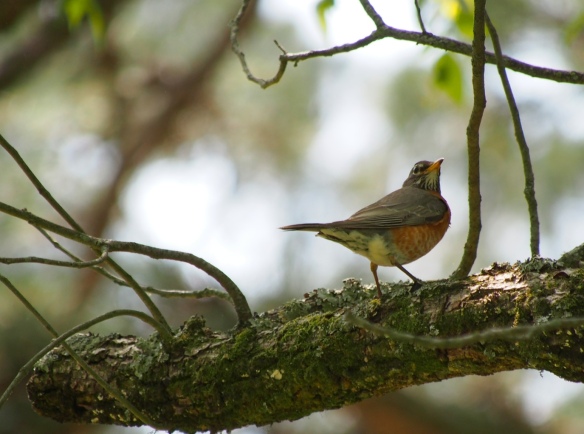 This robin was on a limb over the road. I have photographed robins in 6 states this spring so far. They are pretty calm birds and are large enough to get a good focus. Now that I am looking for birds I see these guys everywhere. I shot this one from the driver’s seat of my Jeep.

I saw this water turtle I a couple of weeks ago while running errands in town. There is a small lake on a loop and I spotted him on a log floating. I was about 30 feet from him so I stopped the car and stepped closer. He let me get off a couple of shots and he dove out of site.

I’m fascinated with cardinals, this isn’t a very good shot. I’m working on it though. They are very skiddish so they are tough to catch. This one is at a local amphitheater – his mate was in the woods fit above him. I have some at my house and have put out some feeders hoping to attract them and get them more comfortable with me, I hope to get a couple of good shots before summer is over.

Swallow tails are a fixture in the Ozarks in the spring. This one was on the side of the road in the sun. I’m amazed by their color and the texture of their wings.

These are just a few of the things I encounter every day. What did you see on your commute today?