Skip to primary content
Today is my friend’s birthday – it’s not just any birthday, today Mary Jane turns 100! I have known her for over a decade, and have learned so much from her about life and what really matters. Today I thought I would share some of the things I have learned from her with you. 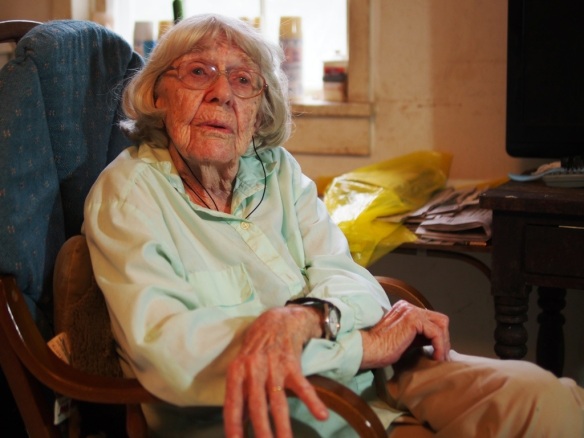 This is Mary Jane on the last day of her first century.

The land matters.
One of the first things I learned about Mary Jane was that her family had once owned a great deal of land. She inherited land from her parents, and in the 1950s sold a section to a developer. Today that section is a golf course community with over 1500 residents. Listening to her talk about the land, I don’t hear regret in her voice, I hear astonishment that those who purchased it did not value the caves, the dogwood forests, the springs. One day we were driving on that land and she asked what I thought it would take to buy it all back and tear it all down. She said she liked it better when it was wild. 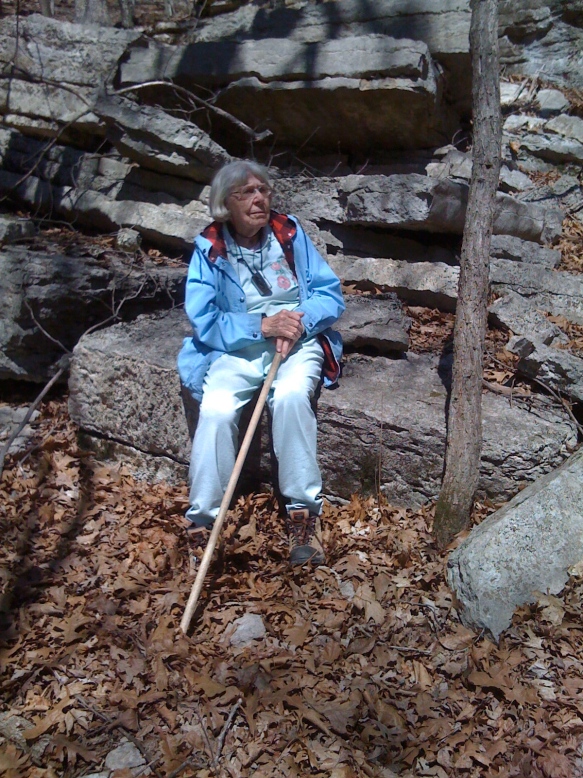 Mary Jane – queen of the woods – seated on her throne with her scepter.

It’s easy to talk about land preservation, but Mary Jane has actually done it. She has placed the entire hollow between her home and the development into a land trust -157 acres that will never be developed, land rich with springs, and caves, and wildlife. A hollow that has never seen a permanent structure apart from the rock formations it contains, the land is filled with amazing creatures like flying squirrels, tortoises, deer, and even the occasional big cat. This land is an amazing gift to her community and to the future. 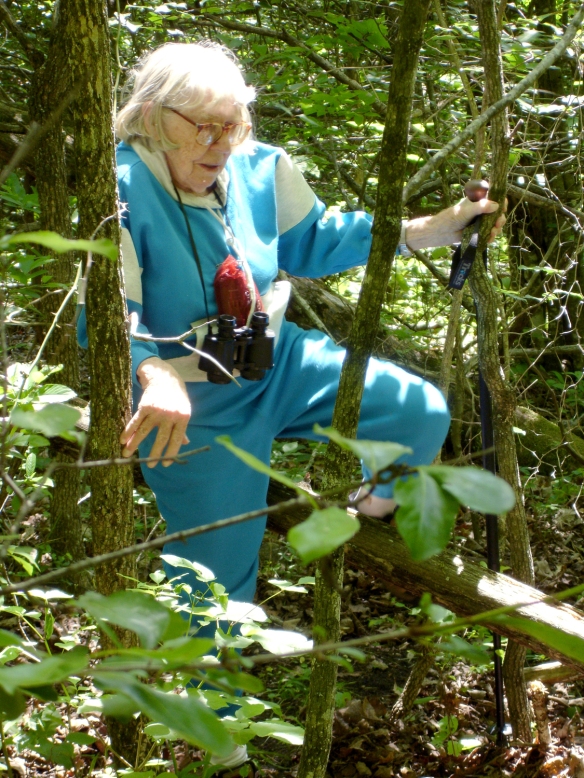 A 93-year-old Mary Jane blazes a path through the hollow.

Recently a major electric company announced plans to take a high voltage line across the southern end of the hollow. They want to cut a swath 156 feet wide, install 150 foot tall towers, and permanently treat the land with dangerous herbicides. Our small county has been pulling together to oppose the project. Mary Jane was one of the first in line to speak at a public hearing about the project. Although she is not comfortable speaking to a crowd and didn’t have sufficient light to read her notes she told the judge about rare cave fish, springs, and wonders at risk. It was moving to hear her, and to know that her greatest wish is for that land to forever stay as it is today, wild. 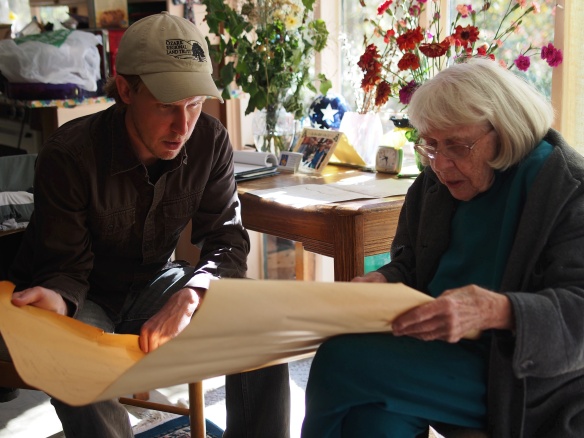 Take care with water.
When I first moved into my house, Mary Jane dropped by while I was having a new dishwasher installed. She saw that and asked me why I would ever want one. To her this was like throwing water over the side of the hollow. You see, when she lived in this house they had a “windless” pump, basically it’s a pump that you crank by hand to bring water up the mountain from the spring below in the hollow. There was no tap to turn on, water was work. Until a few years ago Mary Jane still carried her drinking and washing water from a cistern at a local Grange hall. She was the last resident still using it when they suspended the water testing. Last year she finally installed a cistern and a pump at her home so she can use rainwater for non-drinking uses. She still carries her drinking water each week from a neighbor’s well. She’s spent a century knowing the value of water. Throwing it down the drain seems such a waste. 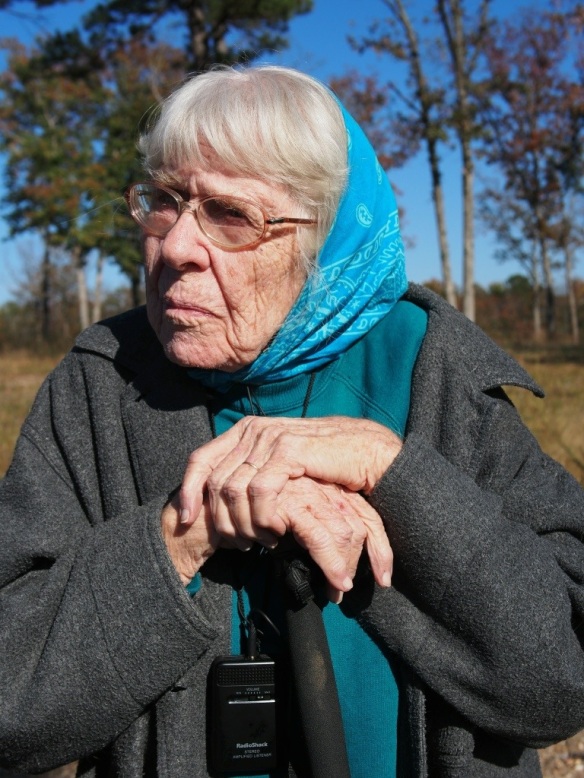 Mary Jane on the land above her springs.

Enjoy the flowers.
You should never mow down flowers, not even wildflowers. Mary Jane’s lawn is not a lawn at all, it’s a field of wildflowers that she selectively mows after the blossoms are gone. It’s been a challenge for those who help with the lawn to know what is a flower and what is a weed. In the back she lets the sweet rocket grow so that the swallowtails can feed on the nectar. It creates a solid field of color about four feet tall. Recently she had the area alongside her driveway mowed, but she made sure that they left the blackberry lilies – she told me that she knew I would want to take pictures of them. For the last few years I have had a “garden fairy” – mysteriously flowers show up in places where Mary Jane has told me that they would grow well. Irises, daffodils, hyacinths, lilies – all planted in areas like the dip where a cistern used to be or along the patio. I’ve got a 100-year-old friend with a green thumb, so I’m pretty sure the mystery is solved. 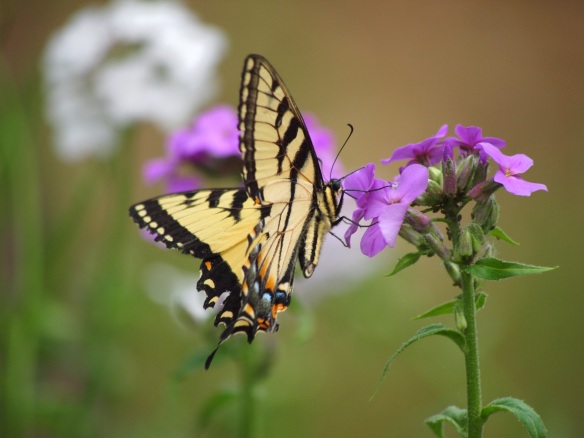 A tiger swallowtail lights on the sweet rocket behind Mary Jane’s house.

Several years ago Mary Jane asked if I would like to go on a hike with her. She told me she’d like to go into the hollow to show me something – she took me down to the bottom where there was a horseshoe-shaped waterfall. I thought that was the destination, but it was just a stop along the way. We bushwhacked up the other side of the hollow, she climbed up that hillside so nimbly – and she took me to a barren spot. The power company had clear-cut a 30-foot-wide power line easement and she had been able to see the bare spot from the other side of the hollow. She took several envelopes out of her pocket and told me to open them – they were filled with seeds that she had gathered from wildflowers. We scattered them all over the right-of-way. Thistles, sweet rocket, matrimonial vine – she envisioned that spot alive and brimming with color again. All it took was an afternoon and a few miles up and down the hollow to reclaim a spot in the woods that only she knew about. 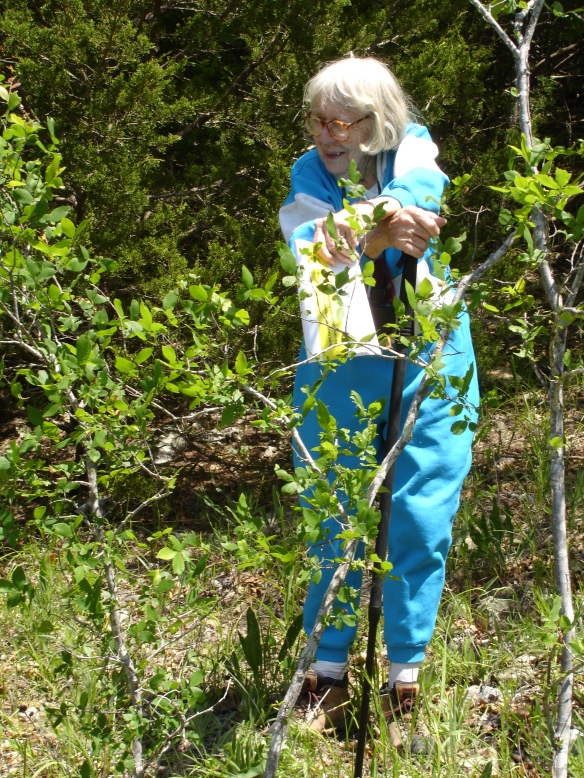 Mary Jane is a firm believer in flower power.

Be kind to animals.
Mary Jane keeps a photo of a raccoon pinned up on her living room wall. It’s one of the many coons she has fed over the years. I’ve seen her feed them peanut butter sandwiches by hand. Most evenings they come to her door looking for dinner. Before she stopped driving I saw her parked on a pull-out next to a creek. I pulled over to see if she was ok, she was fine, she was just relocating a king snake that made its way into her house. She didn’t want her cats to harm it. Recently she called me, terribly concerned over a wren that had been hurt at her house. We wrapped it up and put it in a kennel cage and headed out to meet a wildlife rehabber. It didn’t survive the trip, and Mary Jane couldn’t bring herself to speak on the ride home. I sometimes look on her in awe for the childlike way she approaches and treasures wildlife, whether it’s a bug, or a snake, or a rabbit. 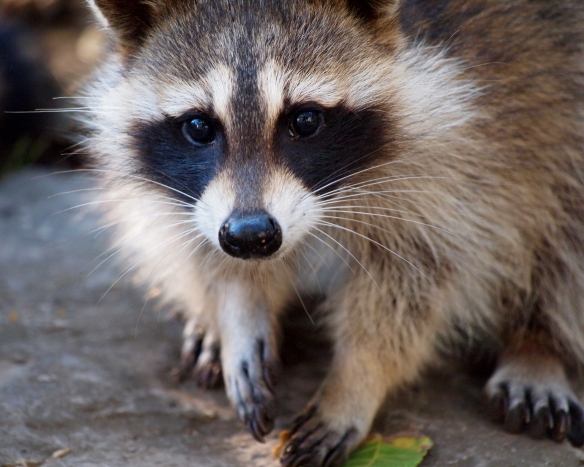 One of Mary Jane’s many forest friends.

Walk.
When Mary Jane’s last car threw a rod I offered to help her find a replacement. She told me that she was pretty sure that this was a sign from God that it was time for her to stop driving. She could be seen walking the mile between her house and the grocery a couple of times a week – even in the heat of summer she would rarely accept a ride. She would make a day of it – walking, visiting, shopping, and walking back home. She told me once that she believed the secret to staying flexible and strong was walking. The first time I hiked with her she was 89 and we did 5 miles in the hollow. Today her vision keeps her from walking as much, but she recently told me her greatest pleasure in life has been to walk upon the earth. I think she’s on to something. 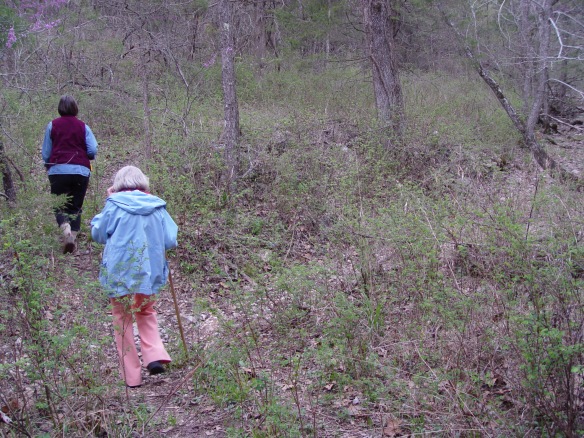 On this day we set out to find Mary Jane’s great uncle’s homestead in a neighboring hollow. Her memory was amazing – we put in several miles that day and she was able to crawl over logs to cross the creek.

Stay connected.
Mary Jane has a network of caring cousins and a couple of grown great-grandchildren. Sadly, she lost her only child a few years ago. She has lots of friends and continues to make new ones. At 100, most of her friends are younger than she is! In the 1970s a group of young people settled into the hollow – she allowed many of them to stay in what is now my house, others camped deep in the hollow or slept on her porch as payment for helping out around the place. This area is filled with people who came to the Ozarks in that era and stayed – many of whom bought or traded for land from her. As twenty-somethings she was the one older person who put a roof over their heads and was a part of their circle. I have seen photos of her at weddings at my place, in a field filled with flower children, Mary Jane could be seen in a smart polyester dress she made herself holding her patent leather pocket-book. Today the tables are turned and they take care of her. They drive her to the laundromat or grocery store, they help with her water, they care for her animals if she is sick. Mary Jane has a family – but she also has this family, her “Hippie Family” as she described them to me once. She looks at them as the children and grandchildren she never had. They are integral to her daily life. Thinking in those terms, Mary Jane is like family to me too. 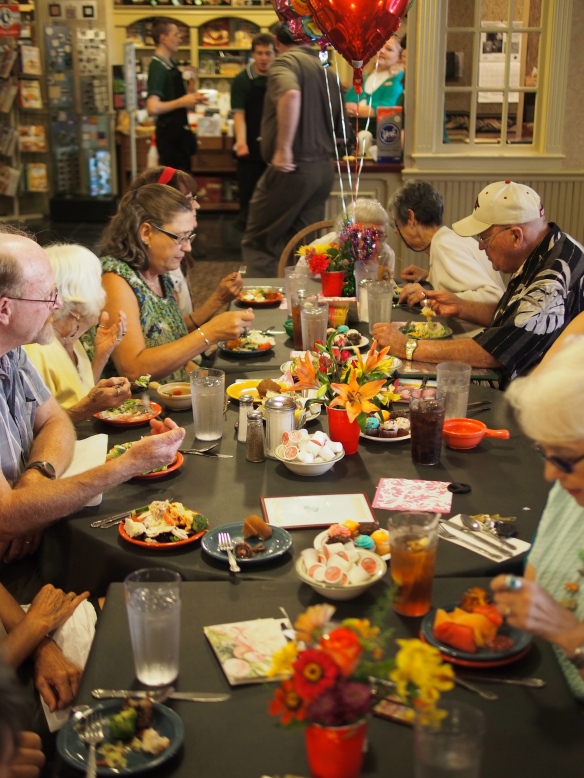 Last years birthday celebration took up over half the restaurant – people who stay connected to Mary Jane.

Time matters.
I never manage to just pop in to Mary Jane’s place, I’m always there a minimum of an hour or two – we have spent hours listening to bird calls on my iPhone or looking at old photos. She tells me the most amazing stories and I get a bit more of a window into her life. She listens to my life stories with wonder about the lands west of the Rockies. Sometimes we will spend a whole day out on an adventure – a trip to a museum or just a country drive. She has a goal to drive on every road in Carroll County, I think she may have already covered them all, but she enjoys showing me the hidden treasures that you often find down a dirt road. 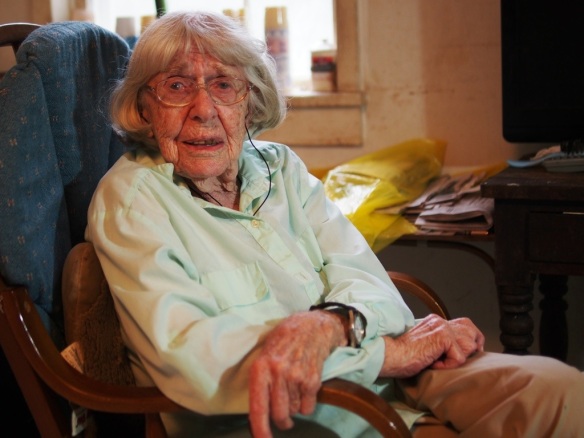 A conversation with Mary Jane

Yesterday I stopped by to see Mary Jane, we almost always connect on the weekends. If I haven’t heard from her I will pop by in the afternoons. We are having a big celebration for her next week, but I wondered what her plans were for today – THE day.  She told me she had no plans and that she would love to have dinner with me, but more importantly she would like to spend time with me – she wants me to stay and visit. You know, I want that too. 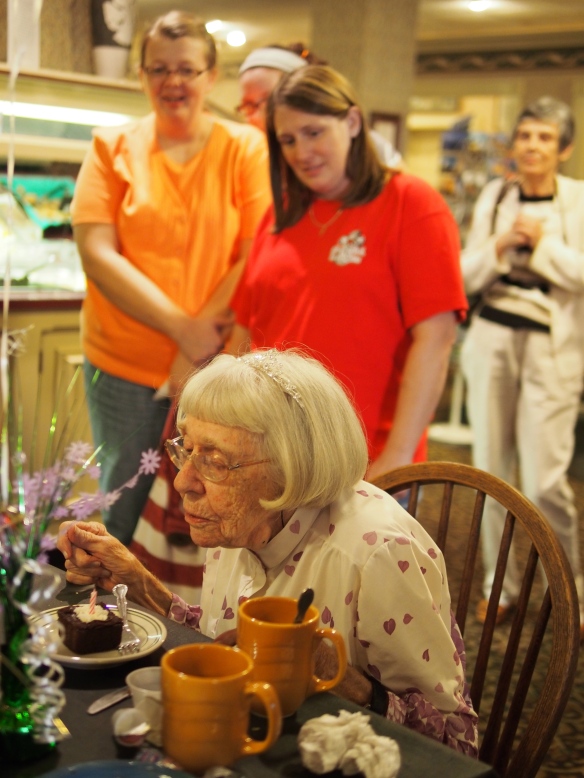 Mary Jane blows out the candles on her 99th birthday surrounded by family and friends.

Next week Mary Jane will show up at her favorite restaurant filled to overflowing with her family, friends and neighbors. Tonight we’ll have dinner and good conversation. Maybe I’ll learn something new.