Today is Mary Jane’s 99th birthday. She’s one of my closest friends, someone who has taught me a great deal about life. I consider her a mentor and love spending time with her. She’s a year older than my Grandma would have been, and she was raised only 30 miles from my Great-grandfather’s homestead, so I suppose that she has some mannerisms that feel familiar to me. Like my Grandma, she is an excellent story teller.

I connected with Mary Jane the first time I met her. I live in the house her father built in the early 1920’s. I called her one winter day not long after I moved and introduced myself. I had been told that she was close to 90 and could tell me a lot about the my place. She had some difficulty hearing, but we had a nice enough conversation.

The next morning she was at my door – she had driven her convertible K-car through the snow and up my 100- yard-long driveway through the woods. When I first saw her, I assumed she was her 70 year old daughter. She was agile, sharp as a tack, and excited like a kid in a candy store to show me around my own house. We climbed up in the attic and down in the cellar. She told me my front door was actually the side door, that the strange molding in the attic was the missing plate rail from the dining room wall, and lots of other structural details. When she got to the porch she saw that I had re-hung some screen doors that I found out in the shop over the french doors. She got a little choked up as she told me that she had helped her father make them as a child.

We sat down in the living room and she told the story of her mother reading Better Homes and Gardens and seeing an article on the “California Bungalow of the Year” home plan. She fell in love with it so they ordered the plan for $25 and built it themselves from the rocks cleared from the land that they farmed. She even showed me a pile of surplus stone in the woods near the house.

Over the following weeks Mary Jane would pop in to visit and tell me more about the house. One day the following spring she called to ask if I would like to go for a “walk” – I agreed and we took off down what looked like an abandoned driveway off the dirt road we both live on. She took me down into the hollow and across the bench (her term for the limestone formation where springs form) to the spring several hundred feet below my house. She shared how they had used a hand crank to bring water up to the house from this spring. Next we went back down the bench in the opposite direction until we came to an amazing pivot rock formation – this is an old photo shot on that first hike with a cell phone – I hadn’t imagine we were going to see so much on a “walk”.

That day we did about 3 miles up and down and I learned one of Mary Jane’s secrets to health, not only is she a “walker” but she loves being out in nature. She knows about plants and herbs. She has an almost childlike love of wildlife. She has an encyclopedic knowledge of wildflower varieties. She told me the other day that her favorite thing in life is to “walk the earth”.

Over the years we have walked hundreds of miles together and she continues to amaze me. Here’s a shot of her at about 93 years old, “bushwacking” through the woods to find an old trail. 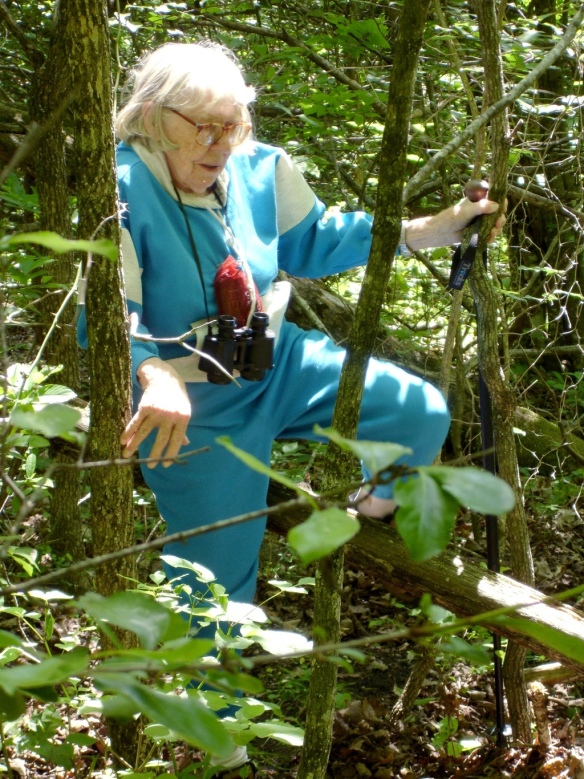 Something I have noticed about Mary Jane – when we get out into the woods she has no problem finding a place to sit and take a break. It’s almost like she is “one with the woods” – its truly her favorite place.

I’ve also noticed that she typically walks with a pole or stick – she has several at her front door. For her 95th birthday I gave her along one with a large top – when she carries it she looks like the queen of the forest.

This one is my monopod – high tech, low tech – no matter to Mary Jane, a broom handle will do.

Mary Jane had mentioned to me that she wanted to see Crystal Bridges – its an amazing new museum of America Art located in Bentonville, Arkansas. It’s nestled into a hollow over an active spring and was built with a eye to disturbing as little of the natural site as possible. It’s surrounded by gorgeous trails and hiking paths. Last month I took Mary Jane to see it, not sure if we were going to look at art or go for a walk. Once we parked she told me that she was much more interested in the outside than in the inside – so off we went.

She had never seen a tulip tree – you can see the wonder in her eyes as she sees her first. 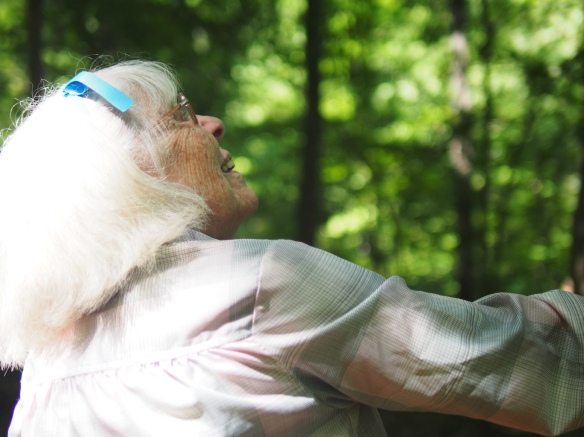 She lights up when she is in the woods. 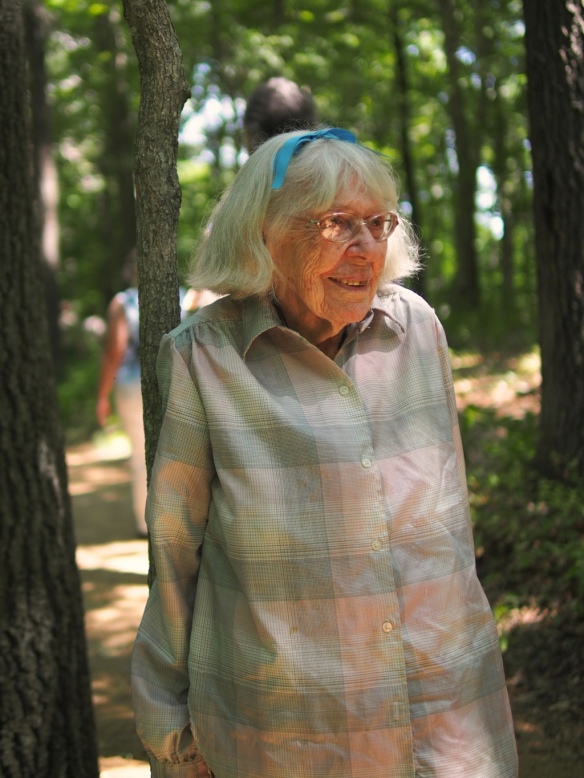 We took a break when we spotted a kitten in the woods.

We finished two trails, about a mile and a half. We came to a courtyard with gorgeous flowers that she had never seen before and discovered that they are called Mary Janes:)

At the end of our walk she told me we need to go back in the fall – she can only imagine how beautiful these trails will be in the fall.

I think that attitude sums up what makes Mary Jane the vibrant person that she is – she’s 99 and still has a sense of wonder and discovery, she still looks forward, and she still loves to walk the earth. 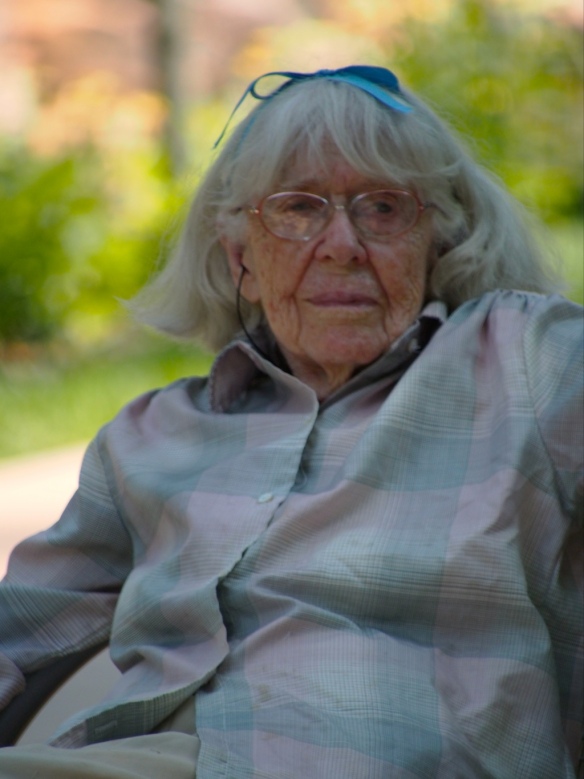