I have done a lot of posts about birds lately so I thought I would change things up. These are a series of shots from last winter taken with what was then a brand new lens – it’s now one of my favorites.

I live in a small village in the Ozarks called Eureka Springs and we love parades! Christmas, St Patty’s, Art’s Festival, VWs, Corvettes, Antique Cars, Diversity, Folk Music and more. Most of our parades are a part of the party we throw for our visitors. We host festivals on dozens of weekends throughout the year. Come see us during VW weekend and we’ll throw a party with a parade and you can be in it! But there’s one party we throw that is unabashedly about us.

In the dead of winter we crown royalty from among our own citizenry and host a week of parties culminated by the annual Eureka Gras Mardi Gras Parade. It’s one of my favorites. Instead of a visitor in a Model T, I get to see our own folk decked out in their best finery with beads-a-plenty. We’re not New Orleans – but that’s OK. Everyone’s welcome, even if you aren’t a Eurekan.

This year I decided to make myself us only one lens.  No bag, just my camera and a single lens and a strap. I had just gotten a Leica 25mm 1.4 portrait lens and decided it was the one to try out. I shoot a mirrorless M4/3 system so the focal length is equal to double the number so this lens is the equivalent of a “fast 50”.

I love this lens and I love the freedom to just shoot. It was so nice to dive in and out of the crowd and not worry about my equipment. With our parades no one cares if you just jump in so I did and got as close as I could to those in the middle of the action. 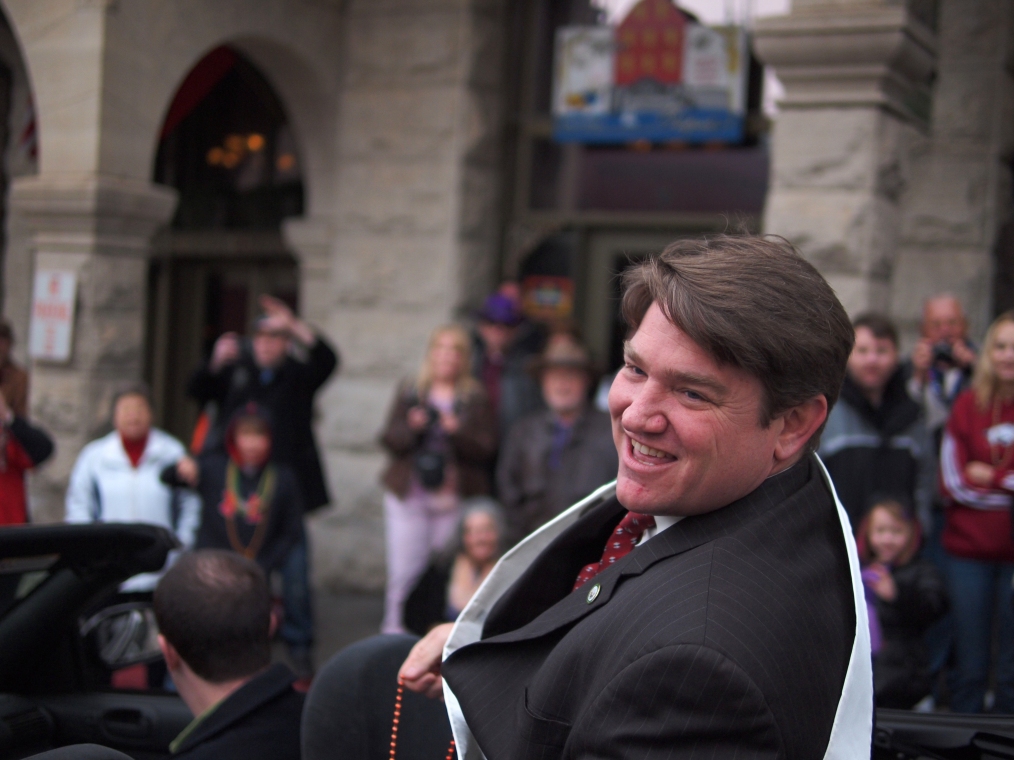 I think this guy might have been a Grand Marshall – I don’t think he got the memo about the dress code.

I did not realize that I knew this lady until I posted the image on Facebook.

Of course it’s fun to shoot the crowd in between floats. The noise and the crowds make this parade a joy to be a part of and the faces of those in the parade echo those of us who were just watching.

This is Judy – We both have birthdays near Mardi Gras so it’s just another party.

One of the things I love about this lens is the way it can isolate the subject. Casual portraits are pretty easy to pull off. I love the control I have over the DOF. 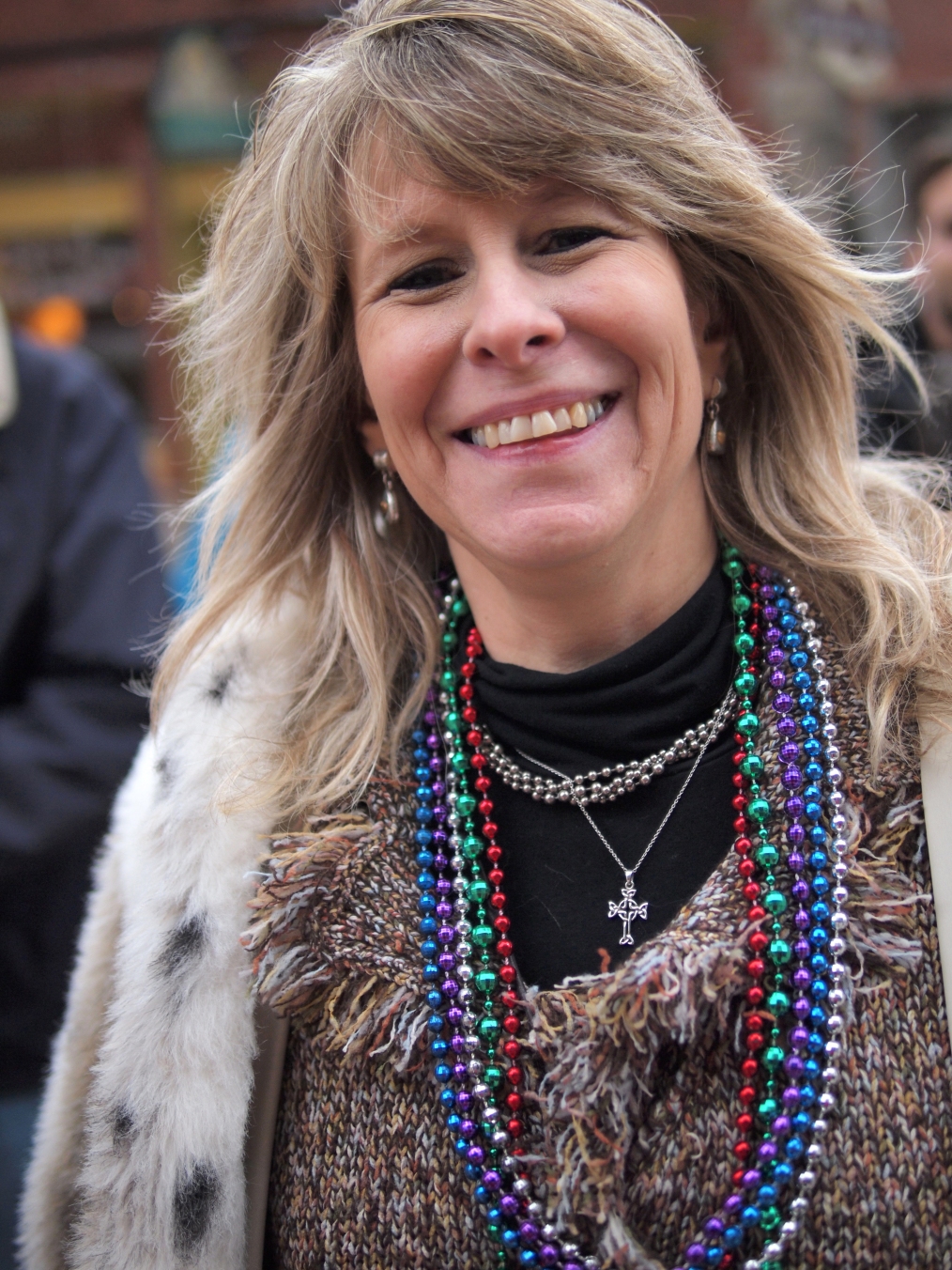 This is my neighbor Lynne – all beads and grins.

As the royal court approaches the beads really start to fly. I was actually hit in the face several times – too busy trying to get the shot to go for the beads. 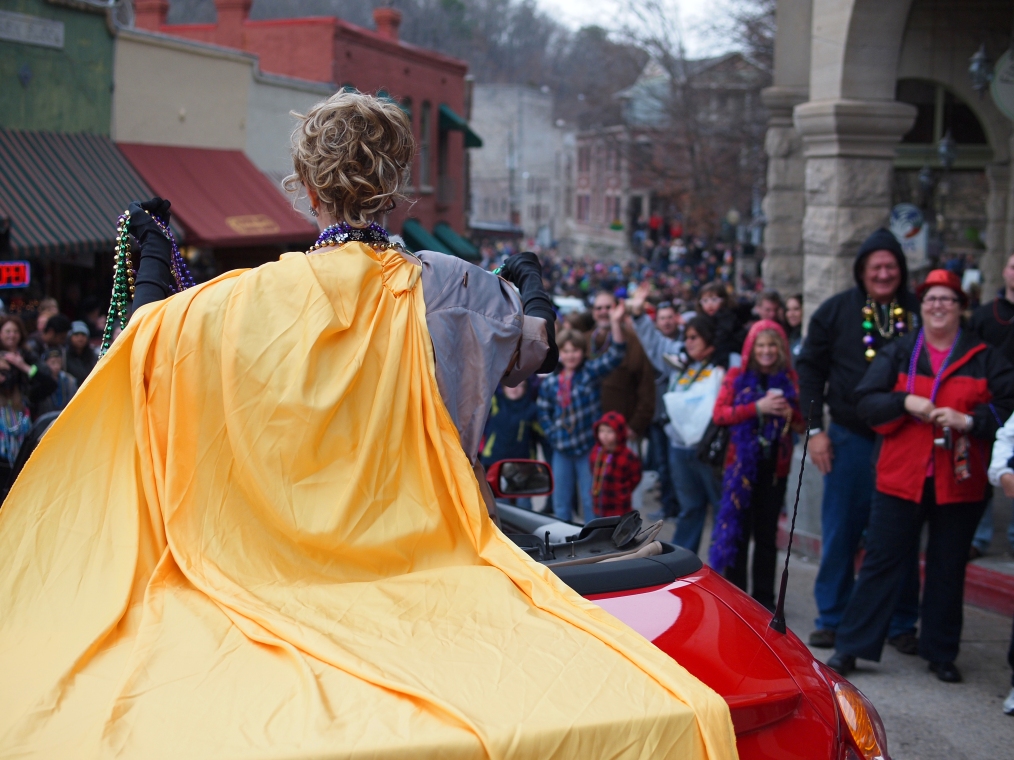 A member of the Court tosses beads into crowd.

The next three shots are from a series of a woman who was originally from New Orleans – the gusto she had for the enterprise of tossing beads into the crowd were amazing – these were my favorite shots of the day – Duchess Pamela. 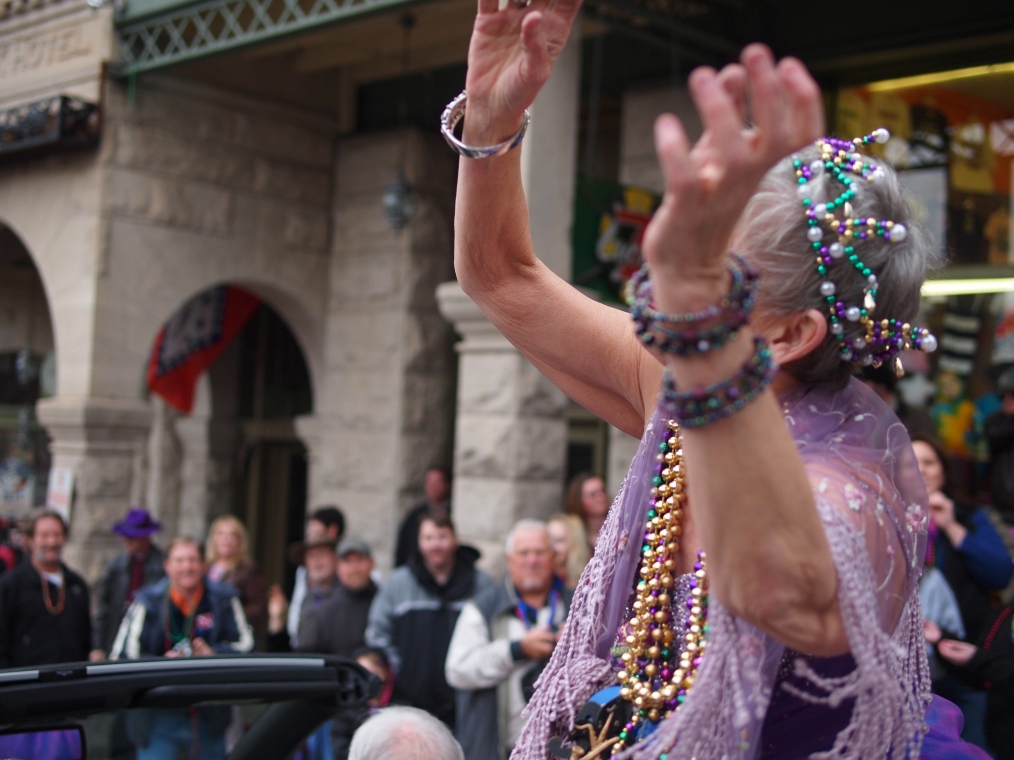 This Duke can’t quite get the beads free to toss. 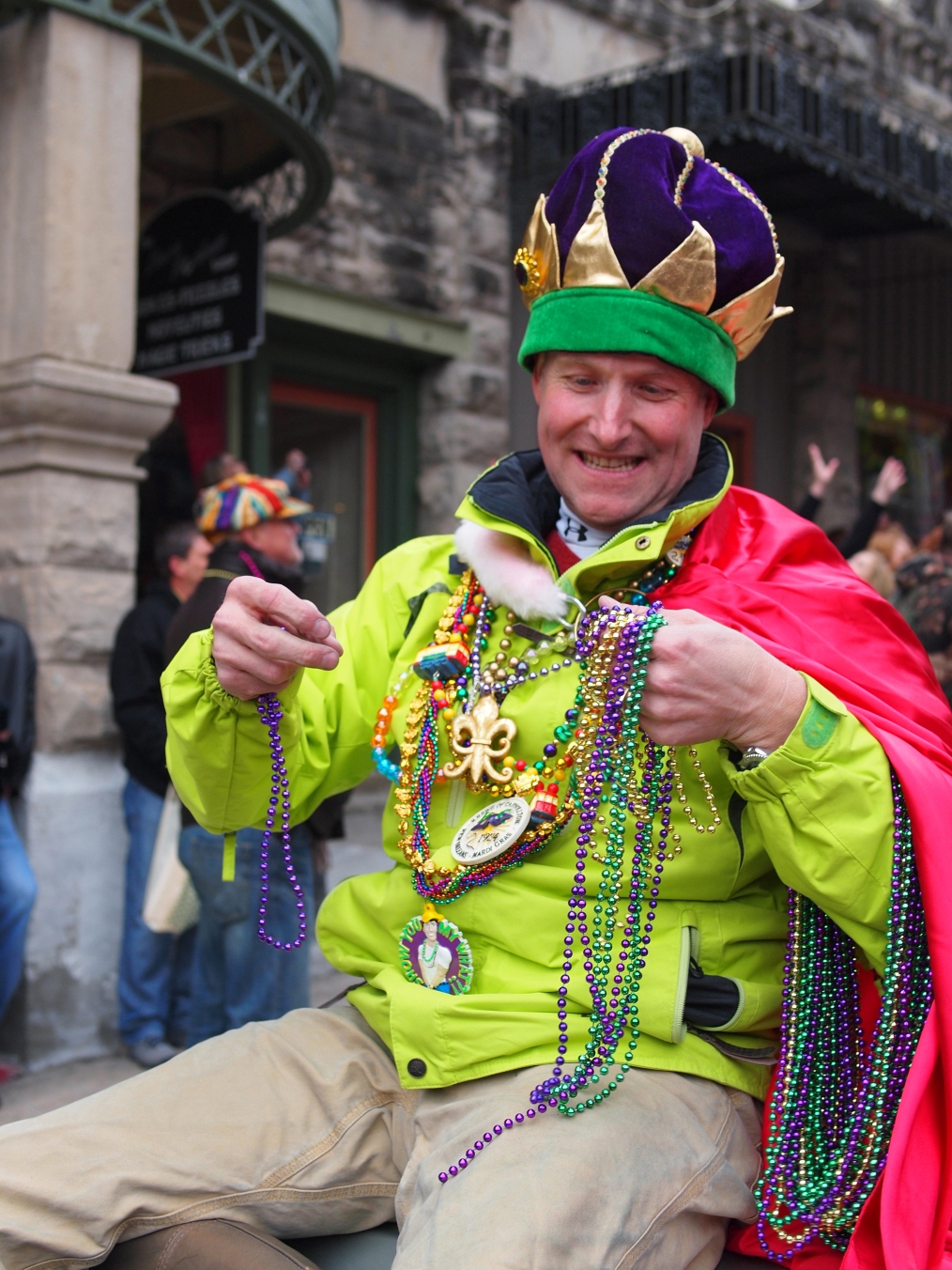 This gentleman owns the local Indian restaurant. I love his smile. 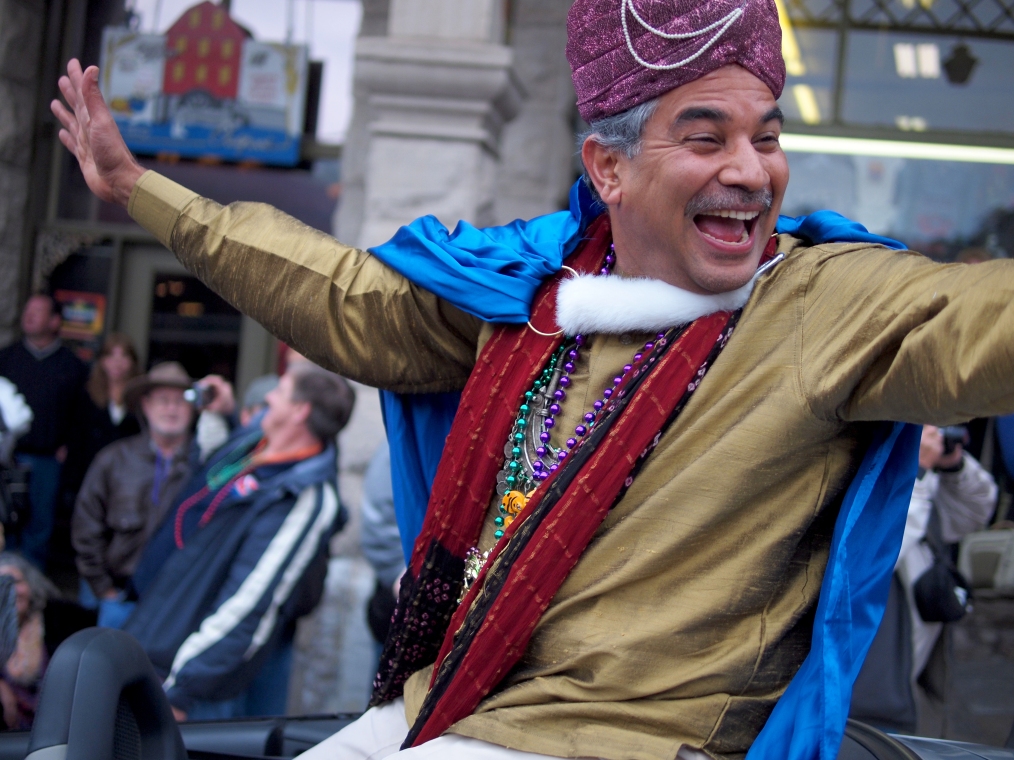 This lens lets you pick a face out of the crowd. This is my friend and co-worker Sharon. 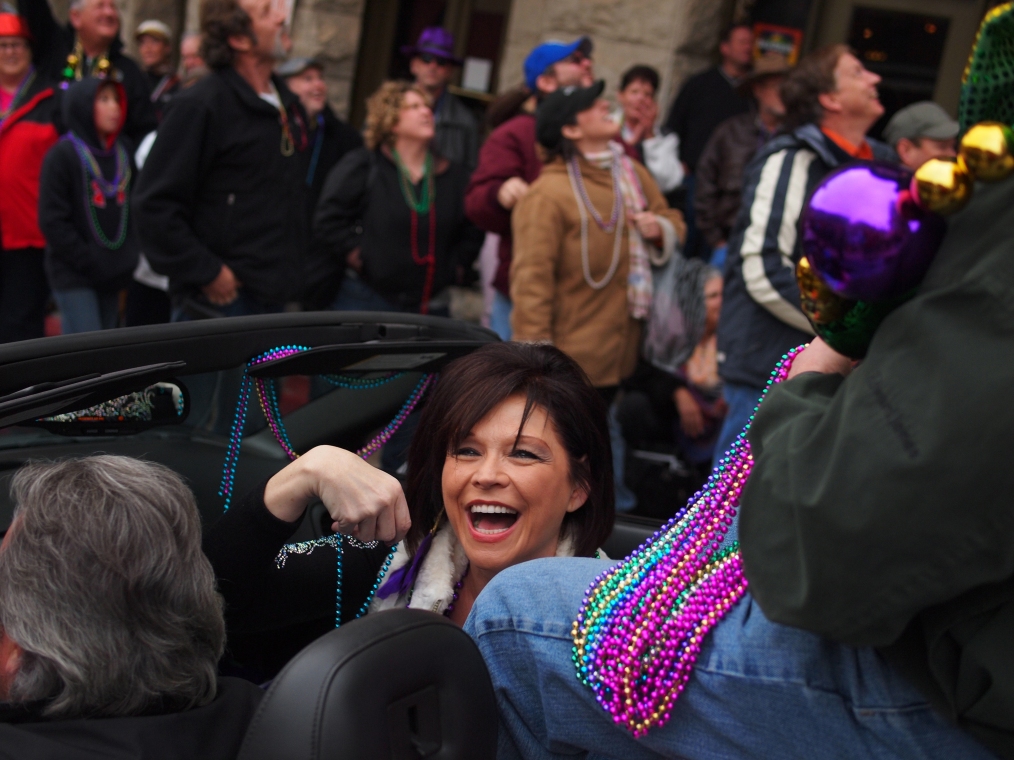 Beadmobile – the crowd’s looking up because beads are flying down.

This young man was all about the beads – he was focused on grabbing as many as possible. 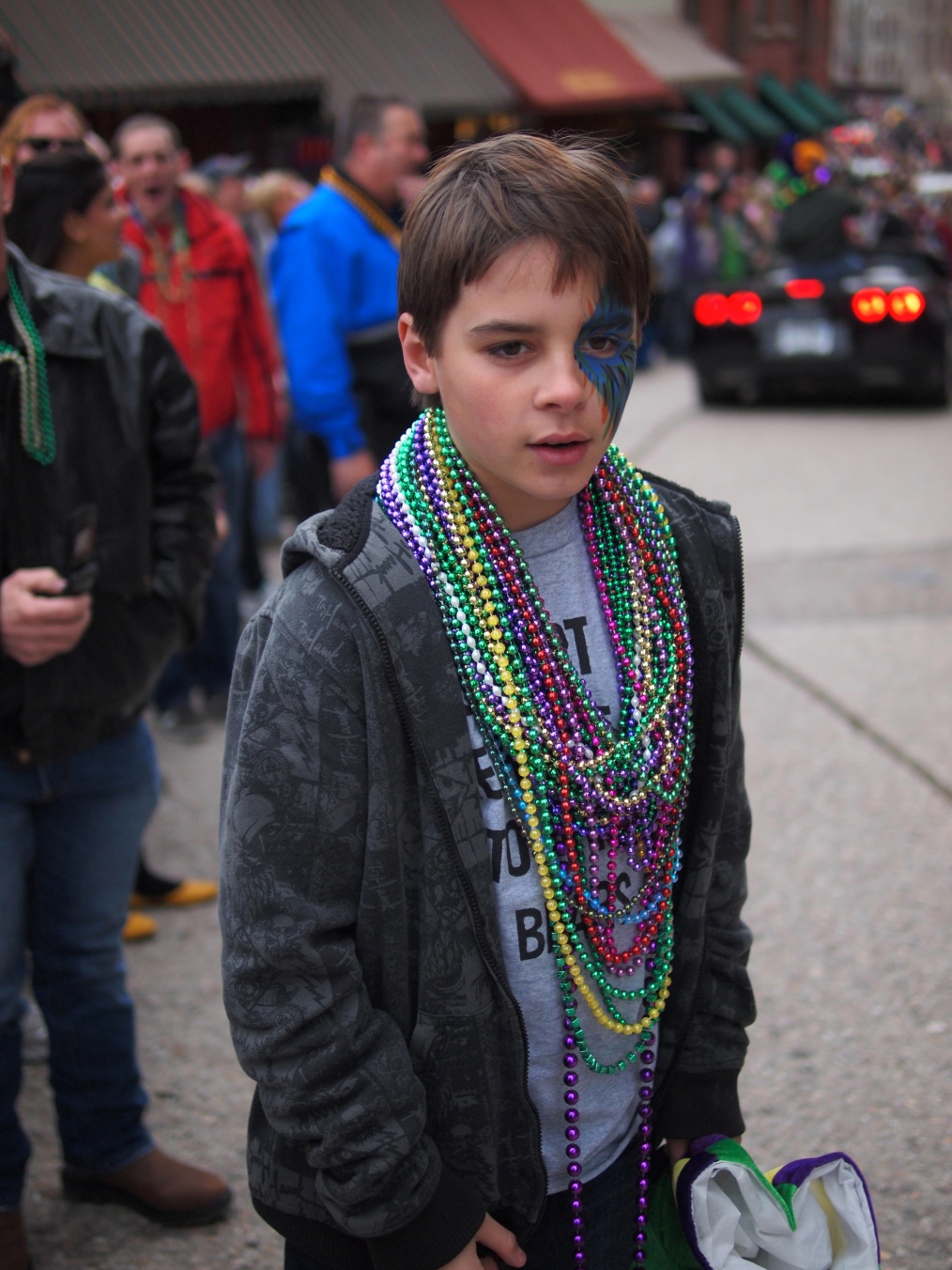 This young man was in the crowd with us – his face painting is awesome.

Some of the floats were quite tall so you get a chance to play with the perspective – the King towers above the crowd.

In between the royal floats there were these fellows on bicycles. I love how this lens let me capture the streamers in motion. 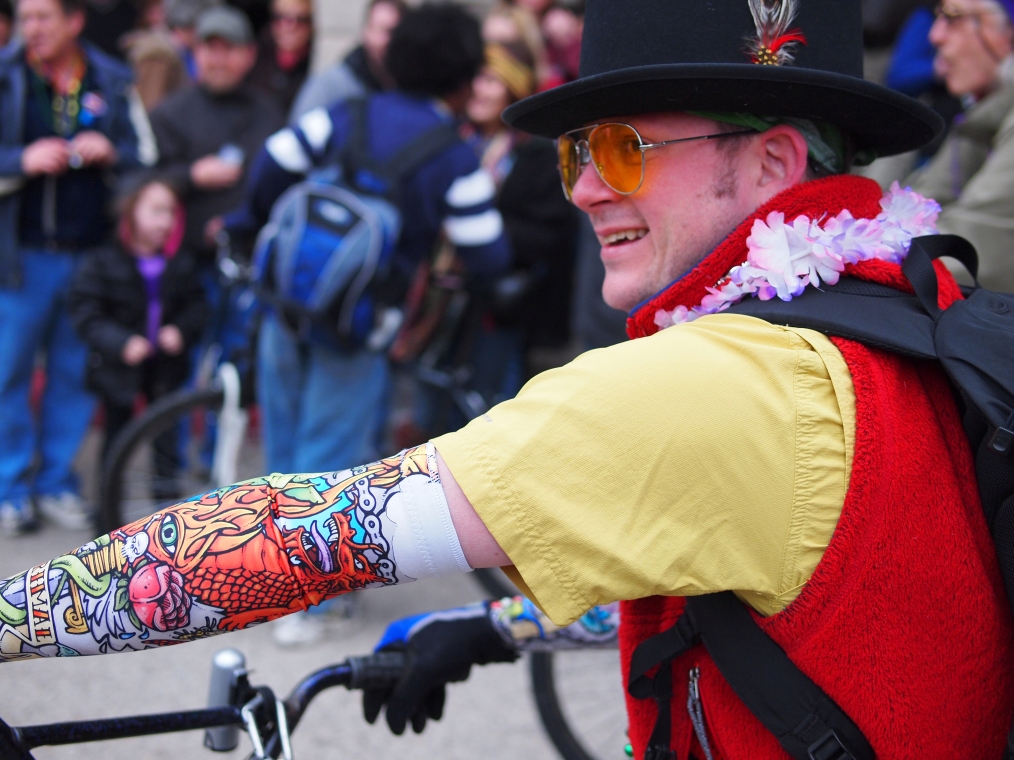 I’m thinking this is a great idea for those who just don’t want to commit to a full sleeve full time.

These kids we part of the Queen’s court – they did the bead tossing for her.

The Queen’s Helpers hoist beads into the air.

Of course we needed someone to control the crowds and keep the peace.

A bedazzled officer on crowd control

I typically try to avoid shooting into an overcast sky – but on this day the colors were so bright I shot up to get Alice letting loose.

Looks like Alice has gone down the rabbit hole and come back with lots of beads.

As the parade ended I got a chance to see some more locals adorned for the day’s events.

This little guy was worn out. Amazing he could sleep over the brass bands.

I love the way this lens made me get close. There were moments when I wasn’t just watching the parade, I was in it. Now I don’t consider myself a street photographer – but I do love a parade.