I love old family photos – I use them a lot on my memoir blog, The King of Isabelle Avenue. I think they are fun to look at and they give me a chance to add some ridiculous captions. Recently Val from The Arty Old Bird contacted me about colorizing (or should I say colourizing) a few of my vintage shots.

As someone who has worked professionally in photoshop since 1992, I’m beyond impressed. Being a “get it in camera” kind of photographer, I take a “light touch” approach to editing. I see people take it too far all the time, sacrificing detail or tone for a perceived improvement that blasts out the color or borders on looking fake. Val uses color richly but shows great restraint, and that’s the true artistry, knowing when to stop. It’s pretty amazing to see these images with color – I hadn’t really imagined that they would be so profoundly different. I feel like I’m getting a window into the world long since past.

The first shot is my great great grandpa Pyeatte, he’s holding my grandmother as a toddler. I think it’s pretty interesting to see snapshots from this era, shots that are less formal than the family lined up in their Sunday best. I have always loved this shot, Grandma was very close to her grandfather, he was someone who told her she was special. I’m quite certain that I have him to thank for the amazing grandmother I had. The Ozark cabin in the background looks just like the ones I see on hillsides around my home. 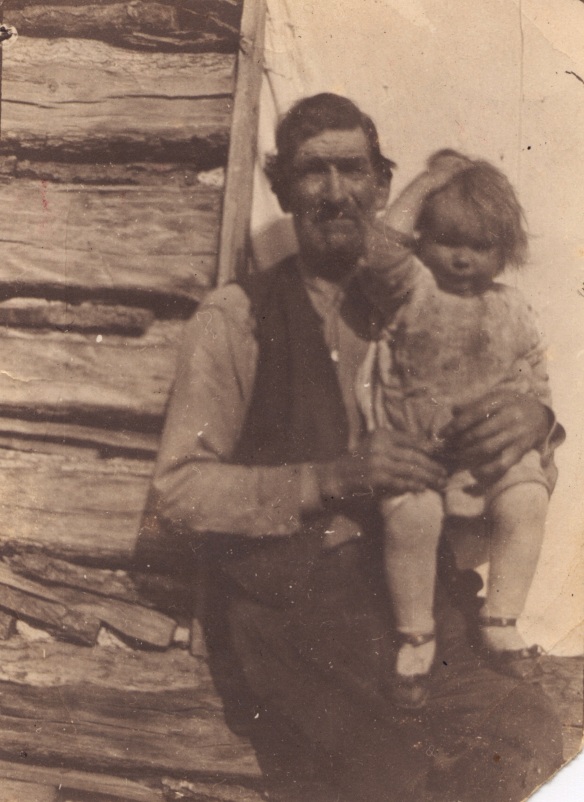 The colour in this version is more of a tinting, it warms and defines the image. I like how Val respects the original image and takes the colour far enough to improve it, but not so far that it loses authenticity. 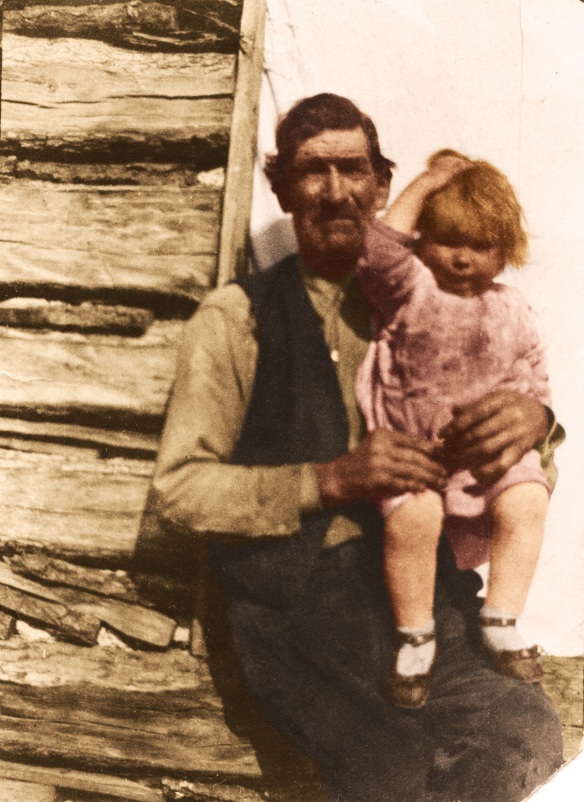 This is a shot of me and my brothers, I’m guessing it’s very early in 1967. It was taken at my grandparent’s home and I was apparently not very happy with the situation. I’m certain it is because I worried that Ronnie would be taking “my room” since this was a constant worry for me at Grandma’s house. It could also be that Ronnie was a bit fussier than Max and that made me less comfortable around him at first. 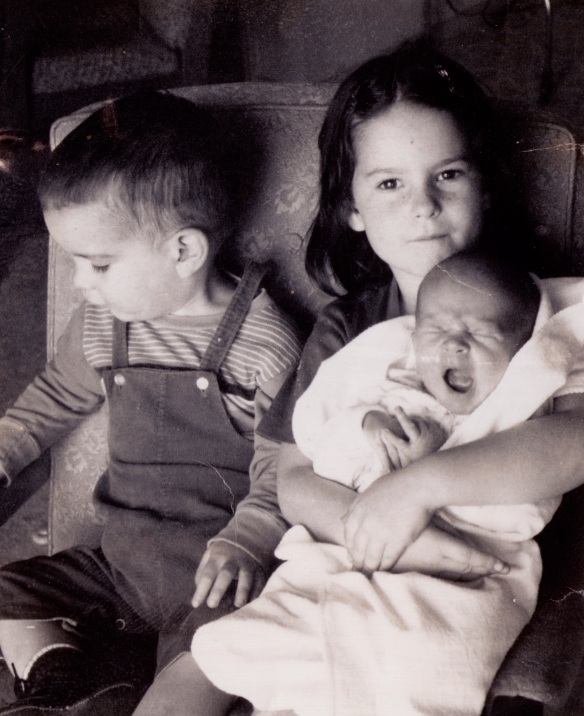 Max was the baby that all the neighborhood girls like to play house with because he was so laid back. I had imagined a baby doll to play with and Ronnie was just not that baby. He was an adorable baby, but oh so loud when he was not happy.

Val made all the color decisions on this and came remarkably close to the actual colors of our outfits. This was a simple Polaroid and Val’s touch has made it so much more than it was.

I love this photo – it’s my Grandma in her Helldorado Emblem Club drill team costume. She was playing giddy-up with the local constable who had just locked Grandpa away in the city jail for shaving his beard – Circa 1948. Helldorado Days is an old Las Vegas celebration that began in 1934 – by 1946 it was so popular that Roy Rogers made a movie about it. I actually rode in the Helldorado parade many times as a kid – it’s a multigenerational tradition. 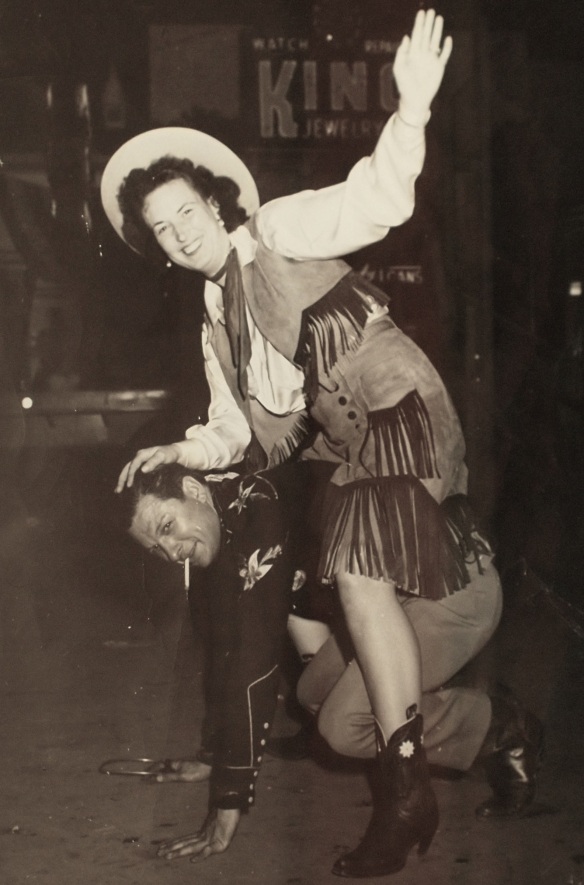 What Val has done to this image is nothing short of amazing. The buckskin outfit, the skintones, the color deep in the shadows – it’s so much more than I expected. Seeing my grandmother in all her youthful, exuberant glory makes me smile – I can’t stop smiling when I look at this photo. 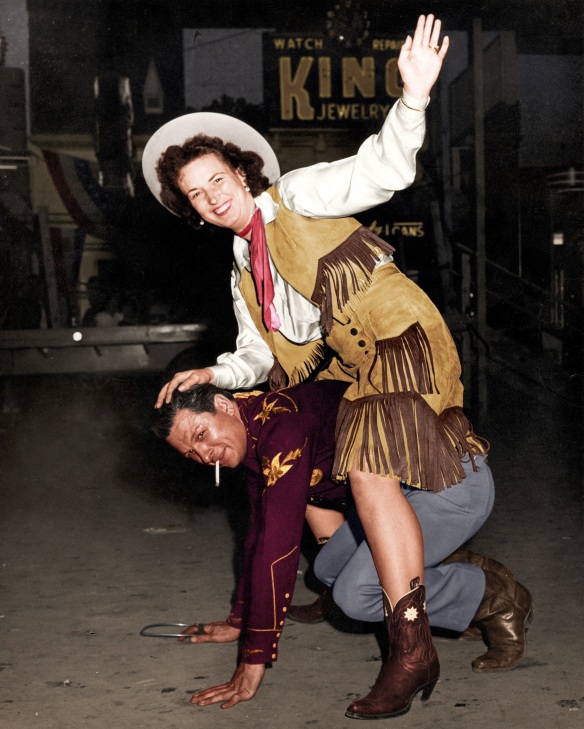 Seeing some of my favorite photos colourized in this way is a pretty special thing. Seeing them done so expertly is beyond amazing. Val’s got skills, mad skills – check out her blog! She’s funny, creative, and poetic – plus she knows a ton of WordPress secrets.

Click here to see what I’m talking about. She’s a good read even if she can’t spell colour.