Skip to primary content
Skip to secondary content
I’ve always been intrigued by cameras and composition. I trained as a fine artist and focused on life drawing and painting with a side of ceramics. In college photography was a discipline I had to study for a year to satisfy the requirements of my BFA. I did really enjoy it, but it was not my “go-to” discipline. I learned the mechanics and even did a few professional shoots here and there. A camera was a tool in my designers toolbox. This all changed for me in 2006, but to tell the whole story I need to go back a little further.
When I was 17 I wrecked the family car. I was coming out of a construction zone and just when traffic started to speed up the car in front of me stopped for a dog crossing the road and I plowed right into it. I didn’t realize that I was so close. Afterward my mom decided to get my eyes checked out. It turns out that I had a slight crossed eye that could have interfered with my depth perception. Along with this the doctor discovered that I had cataracts. I was born with them. They were unusual in shape and not very common. I had 20/20 vision, and really didn’t notice anything. The doctor said that they might never be an issue.

Every time I moved to a new city and got a new eye doctor, they would ask it if was OK to bring in all their staff to see my cataracts, they were very unusual, something you might only see a couple of times in a career. One doctor even asked to photograph them – I finally got to see what the fuss was about. They looked like tiny galaxies, circular with swirls radiating from the center.

Now spring forward to 2006, my eye doctor had advised me that I could really benefit from cataract surgery. He suggested that once I began to lose the ability to focus (we all start to experience this in our 40’s) that I seriously should consider it. By this time I was living in a rural area and I was having difficulty driving at night. It never occurred to me that the culprit might be my cataracts, I assumed it was the lack of street lights. I had the surgery one eye at a time. I was the youngest person in the office by about 30 years. None of my fellow patients could imagine me having cataracts. The surgery only took a couple of minutes, and for those seconds between when they remove your old lens and when they replace it with a new one, my field of vision was filled with swirling rainbows through liquid – it was vivid and beautiful.

The next morning when I went out into the sunlight I was stunned by what I saw. I had always had 20/20 vision. I could see details and contrast just fine. In those first moments that morning I realized that I had never really seen color before. I never knew that a lawn was filled with thousands of shades of green and that each blade of grass both cast a shadow and caught a touch of sunlight. I never knew that the parking lot at work was made up of hundreds of greys and browns – I had always seen it as just kinda black. Before my surgery I had taken photos of mostly still life and everyday objects. I loved finding a new way to see something ordinary, but now my eyes were overwhelmed with the vividness of the world around me. I upgraded my camera kit to better capture the color and began to take my camera everywhere.

After work and on weekends I began to seek out color. Autumn leaves, sunsets, spring flowers, songbirds. The first time I had a show locally, a reporter asked me what inspired me and seemed surprised when I said color, since I had so many wildlife shots and landscapes. The subjects of my beloved still lives became more colorful. Color is the unifying theme of almost everything I shoot.

Today, I cannot even imagine the dullness of the world I lived in for so long without knowing it. I live for color and in the spring time when the Ozarks are alive with color. Currently I have a show up here in Eureka Springs called Harbingers – I collected works shot between February and April to represent those things that usher in a glorious spring after a long cold winter. I’ve mounted each on canvas over hard board and fixed then onto stretcher bars exposing the wood sides. I wanted to try to take the technical photography and give it a warmer hand-crafted feel. As spring has blossomed here I continue to add to my Harbinger library – and it’s no surprise that the images are filled with color. The images used in the show are in the slideshow below. Scroll through to see the images larger and to see camera settings.

Dogwoods against an overcast sky 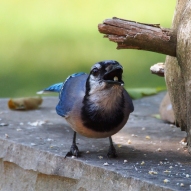 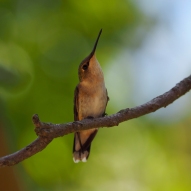 Lady in the Myrtle 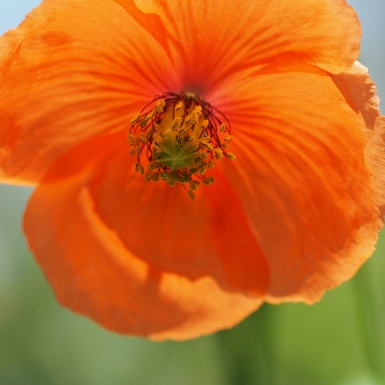 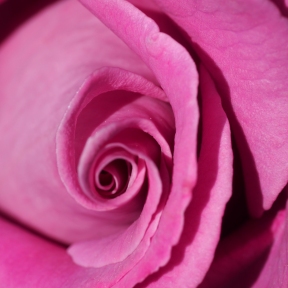 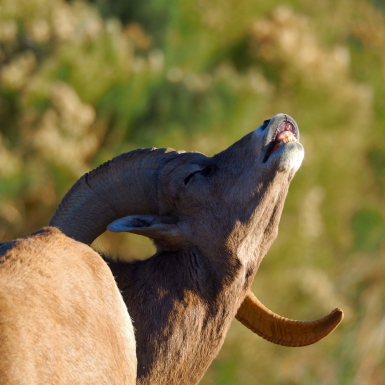 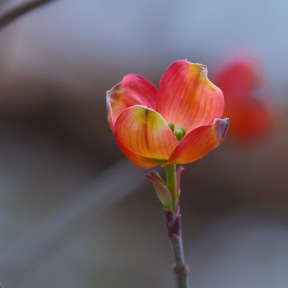 Buzzin’ in the Spiderwort
Shutterbug notes – I chose my current camera set up partly because of its dynamic range. Moving to manual really give you a lot more control over color. Moving off auto gives you access to all the features of your camera and let’s you get the most out of it. Try seeing things in a new light, you might never want to go back to your old ways of seeing the world around you!

A few years ago a female peacock showed up in the neighborhood. We searched for her owner, but no one came forward. Over time she became the queen of her corner of the highway. She spent most of her time on the porch of the Heating and Air place or in my neighbor Barbara’s back yard. Barbara eventually took her in and named her “Pretty” because she loved to stare at herself in the mirror.

The next spring this fellow showed up unannounced…

He was young and out on the town. Again we tried desperately to find his owner to no avail. He fell head-over-heels for Pretty and all attempts to relocate him failed. A neighbor right across the road had a problem with snakes and decided that this handsome lad might be just the ticket. Poco took him in and he thrived, but sadly Pretty did not. She was killed crossing the road to see her beloved.

Our young fella spent weeks crossing back and forth after Pretty passed. Eventually he settled into a routine and he can be seen at the Grange Hall on the swing set, at the Heating and Air, and even on Poco’s chimney. He is a wonder in flight. Poco named our mystery man Krishna. In a sea of green and brown, he is hard to miss.

Looking for love in all the wrong places…

A couple of winter’s back we installed new french doors on the old Grange Hall that serves as a community center for the neighborhood. Immediately our lovesick boy found solace in the windows – each afternoon he could be found on the porch admiring the mystery bird inside the Grange Hall windows. I went to get closer after taking this shot and he audibly scolded me. I learned that you can’t come between a man and his own reflection.

Peacocking around – strutting my stuff.

Krishna has grown from a young buck to a glorious sight. He walks upright along the road and struts, but something has been missing in his life – love. Each spring Krishna will call out with all his heart, he will display his plumage on the swing set and from the chimney top, but to no avail – until this spring… 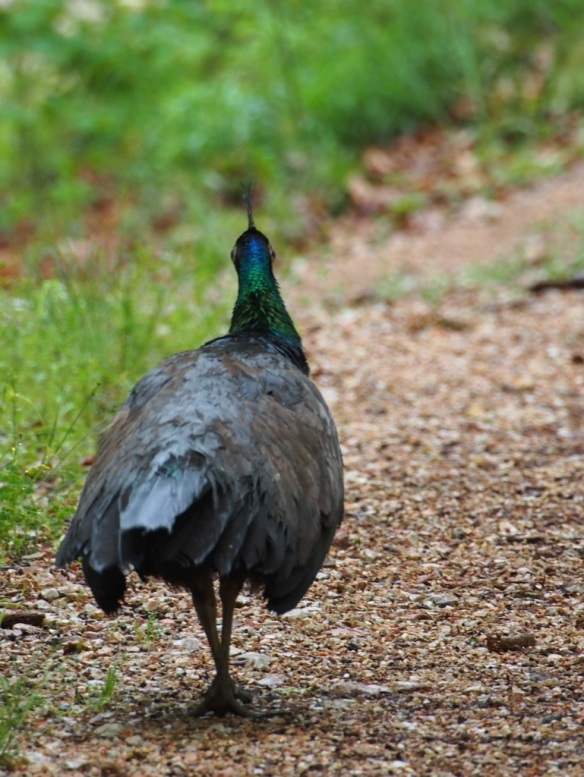 Just a couple of weeks ago I saw this little beauty on my drive home. She was strutting her stuff about a quarter-mile from the Grange Hall. There are reports around the neighborhood of the two love birds getting cozy at the Heating and Air place.

I regularly see them on the road – most often one is searching for the other. Krishna will pace along the dirt road and look for his lady-love in the woods, and she does the same. I heard a report of her watching him on the swing set as he displayed his plumage. I’ve yet to get a shot of them together, but after all, lovebirds want their privacy.

Unlike Pretty, the new girl in town appears to be the same type of Peacock as Krishna – even though she is green, she has the same face mask. And when she walks down the street, she really shakes her stuff. 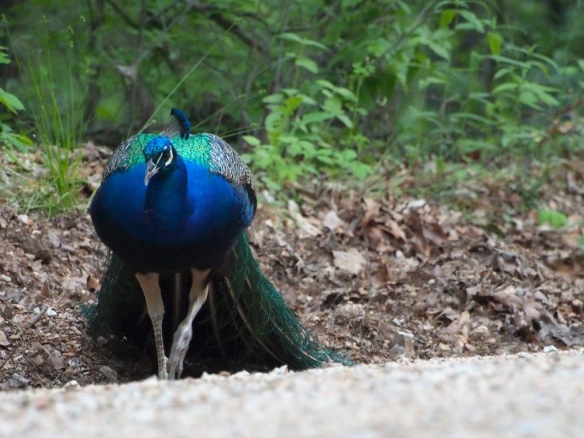 I’d walk a mile for you…

Krishna is old school – I see him making the trip to pick up his girl, across the road, around the corner, through the woods to the dirt road. He’s never looked better. He’s quit chasing after that bird in the Grange Hall windows, there is something real in his life now. 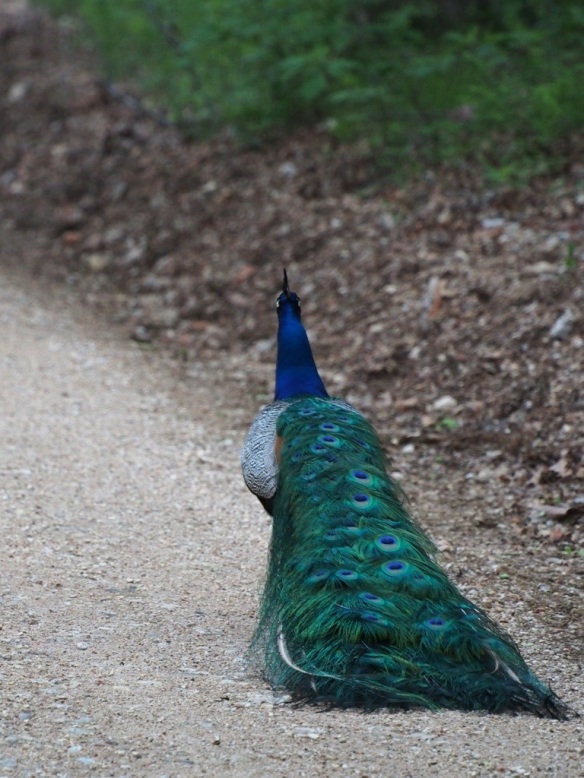 That long and winding road that leads to her door.

Perhaps Peachicks are in our future?